A Day Trip To The Wizarding World of Harry Potter Osaka

Harry Potter, a film that needs no introduction, had been an obsession of mine way back when I was in Primary 6. It all started when I watched the first ever Harry Potter and The Sorcerer’s Stone, where I wanted to go to boarding school. I can imagine getting new friends and learning magic and how to fly. During that time almost every day I would imagine that I would be able to go to Hogwarts Castle.

Among all of the Harry Potter movies the first one had the most impact on me. This is because I was still a kid so things were somewhat relatable with my life at the moment. I grew up from year to year until the last movie of Harry Potter premiered.  Despite this, I was still not able to move on when it ended, and thank God they continued it with the movie Fantastic Beasts. Therefore I was able to release the miss for Hogwarts Castle. This year when I got the invitation to go to Universal Studios Japan (USJ) I was beyond excited as all I could imagine was going to Hogwarts Castle. Once arrived I imagined that I will be able to wear the Gryffindor robe, while holding a wand and casting spells like Avada Kedavra, Expecto Patronum, Wingardium Leviosa and many more. It all feels like a dream.

Finally the day has arrived when I reached Universal Studios Japan. The first activity for the day started with One Piece Water Battle, Minion Park area, The Wizarding World of Harry Potter, Water Surprise Parade and The Wizarding World of Harry Potter one more time as once you know is not enough. I already felt happy even just wondering around Hogwarts Castle without doing any activity.

It was a 4 days and 3 nights trip, where the third day we’ve decided to spend the entire day at USJ. We arrived at the gate as early as 8 in the morning but it was drizzling, and lucky for us that we brought our raincoats and also not to forget the USJ staffs gave us the umbrellas.

If you guys want to read the entire 4 days 3 nights at Osaka you can read it here 4D3N Holiday at Universal Studios Japan, Kyoto and Nara With Kkday Malaysia.

I only got into The Wizarding World of Harry Potter once I’ve visited the Minion Park area. Once you are about to reach the entrance you will be greeted with a very familiar sound, which is the sound of the forest with birds chirping. All these had already made me feel excited and happy.

Since I visited the Minion Park before I came here so all items from that world I decided not to bring in as these could kill the whole vibe of Hogwarts.

Alright before that, you need to know that it is not easy to play the games in here. One of the reasons is because there are loads of people. Therefore there will be a long queue if you decide to take part in their activity.  So I suggest that you buy the Universal Studios Japan express pass at Kkday. This will help you cut all the long queues and waste time.

I cannot tell you all the details as this will be a spoiler right? But I can guarantee that once you enter you will be able to reminisce the first ever Harry Potter movie, just like how they reached Hogwarts for the first time and the train and what not. Just wow. And then the winter season was just amazing. You can really feel like you are in the magic world.

The main activity that you really must try here is the Harry Potter and the Forbidden Journey. To be honest I’m the kind of guy who is quite afraid of roller coaster ride but for the name of Harry Potter and the Forbidden City I get all excited. Feels like you are playing Quidditch. Swear to God you have to try. During this ride you will come across characters featured in the first movie. 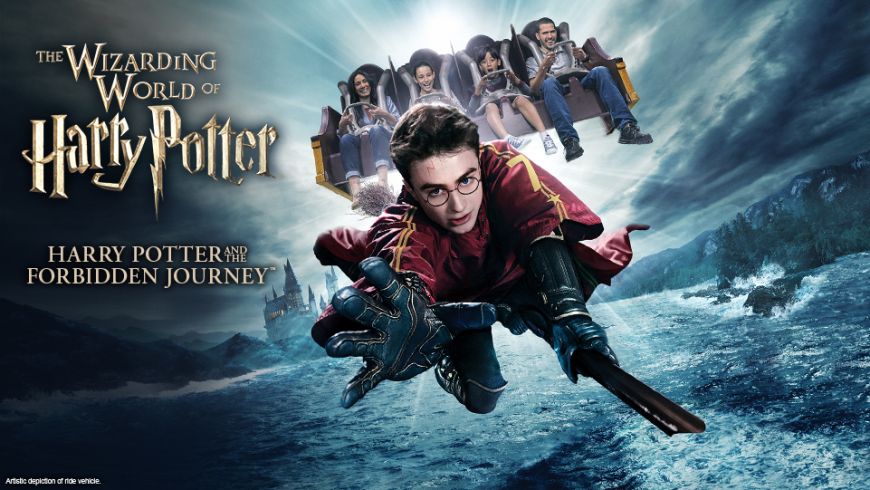 Besides that there are other games that I was not able to play so I decided to chill outside while drinking their Butterbeer while having the Hogwarts Castle as my background. Your trip to Harry Potter World will never be complete if you don’t drink the Butterbeer and have it stick to your moustache. Hahaha.

Not to forget you can also rent their 4 houses robes.  I was aiming to wear the Gryffindor but at that time there were so many people wearing it so I decided to give it a pass and change to Slytherin instead. Suddenly the color green looks kind of suits me well. 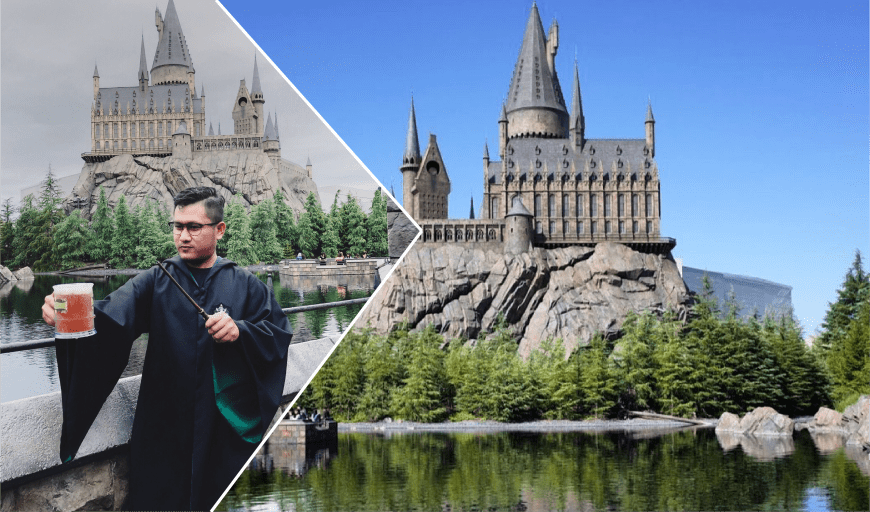 Once finished drinking I decided to take a walk to the shops that sell Wands and other Harry Potter souvenirs.  At this moment I was imagining the scene where Rubeus Hagrid brought Harry Potter to buy his magic school stationeries. There were owls, magic sticks and scarves, fake owls I mean. There were also shows where you can take photos with the owls.

There will be a Harry Potter musical in the late evening. Therefore you will be able to watch them acting live.

I spent most of my time here until 6 in the evening. Seriously I am really happy that I was able to come here.  If you are a Harry Potter die-hard fan you must make a visit here at least once in your lifetime.

It is just that the souvenirs here are kind of pricy. I was only able to get myself the iron glass that they drink in the Hall to bring back as a memory.